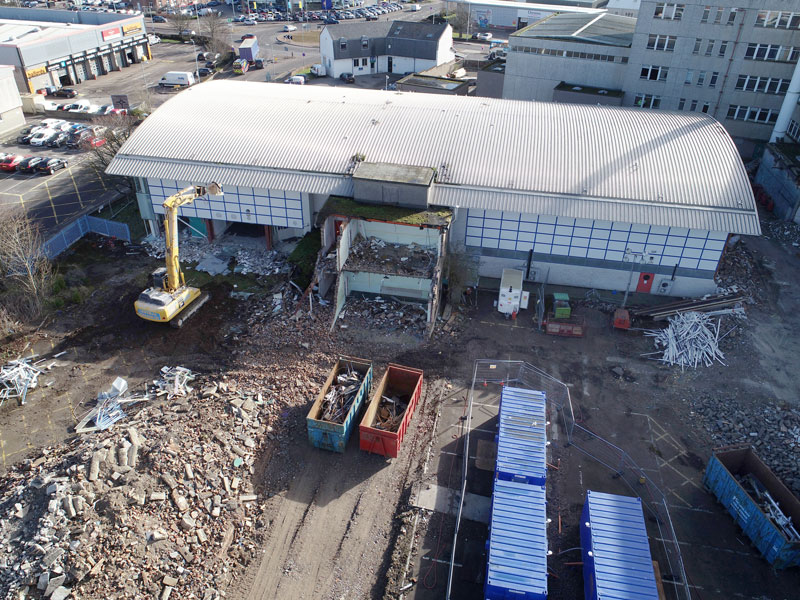 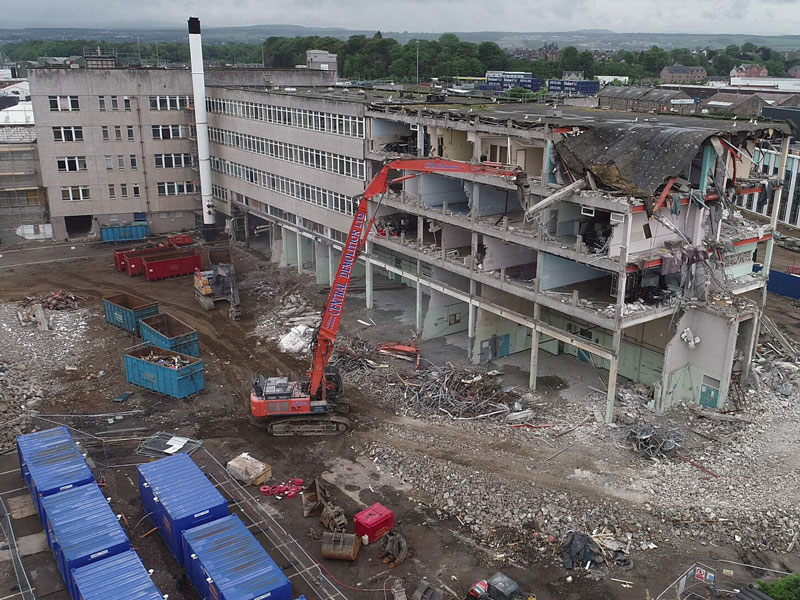 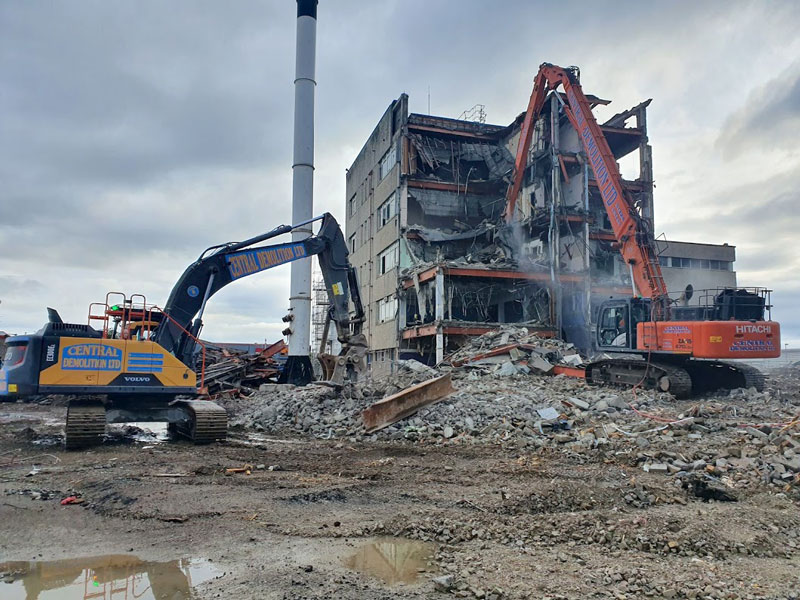 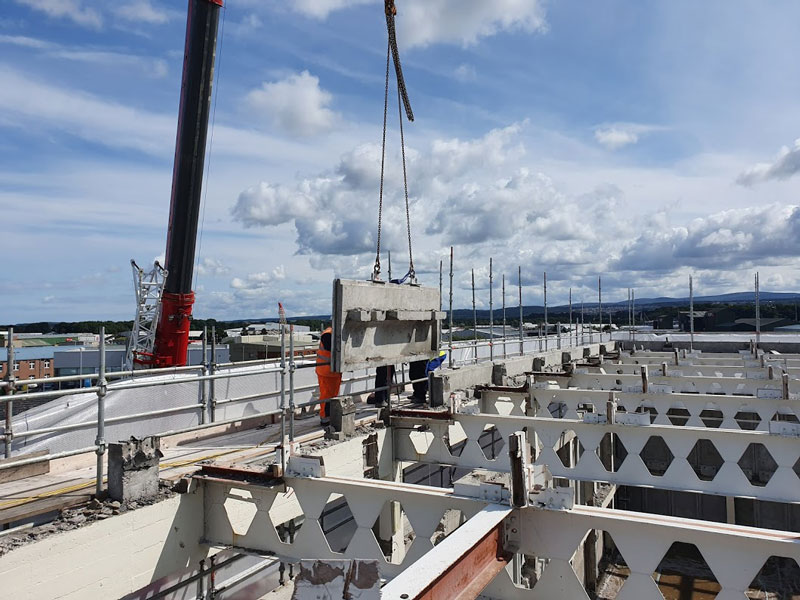 Central Demolition Ltd were awarded the contract for the demolition and asbestos removal works of Inverness College building known as the former Longman Campus on behalf of our client, University of Highlands and Islands. We completed the works in late 2019. 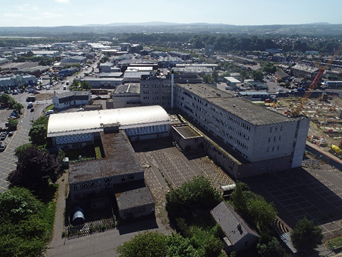 There were various and extensive preparatory works required before the demolition phase of the project could begin. This included general soft strip of the building, in which we offered furniture and equipment that was still in good condition to various local housing and homeless charities, termination of live services e.g gas and electricity throughout the buildings, setting up exclusion zones and constructing a crash deck scaffold to protect a live sub station and Vodafone comms room that was to remain operation during the works.

We then began the process of asbestos removal from the building in accordance with the survey that our client had been given by a specialist surveying company but unfortunately, we uncovered further hazardous material that were not detailed in the report. We managed this by putting in a further notification to the HSE and sending extra labour and resources to site in order to minimise delay to program.

The first part of the campus to be demolished was the hairdressing and beauty classrooms which were demolished by machine, we then moved on to other areas of the building such as the main campus, which demolished with the assistance of Central’s Hitachi zx470 and the library building which demolished by a smaller Komatsu excavator.
Concrete roof panels from the main building were also carefully removed by crane in order to minimise the risk of large debris falling on top of the crash deck protecting the Comms room as an extra protective measure, once the roof panels had been lowered to the ground, the demolition excavator continues to demolish the rest of the structure surrounding the comms room and substation. The final stages of demolition on site included the chimney which was achieved by pre-weakening the structure and gently toppling into a controlled dropzone and finally grubbing up slabs, foundations and then crushing and filling each area on completion.

One of the challenging conditions that we faced on this site was the fact that the SSE substation and Vodafone comms room had to remain operational throughout the course of the works which was the main reason that the protection crash desk was built around the building that housed the equipment. The gym hall building that was originally built on top of the substation and comms room was carefully dismantled in order to avoid any damage to the below building and minimising vibration to avoid damaging the sensitive equipment inside which we ensured were kept at an acceptable level by using vibration monitors. The vibration monitors were not triggered at all over the course of the works. Once the buildings housing the apparatus were exposed, we engaged in various methods of weatherproofing as a protection measure from the elements.

The final recycling rate for this project was approx. 92% due to the amount of asbestos encountered. The other materials such as concrete and brickwork was crushed to 6F2 and used as backfill or sold to local contractors for use on other projects.

We completed the project to complete client satisfaction and within the agreed program extension by the client due to the discovery of extra asbestos containing material. 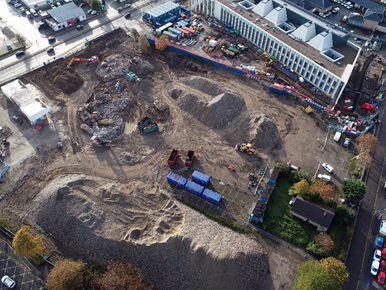 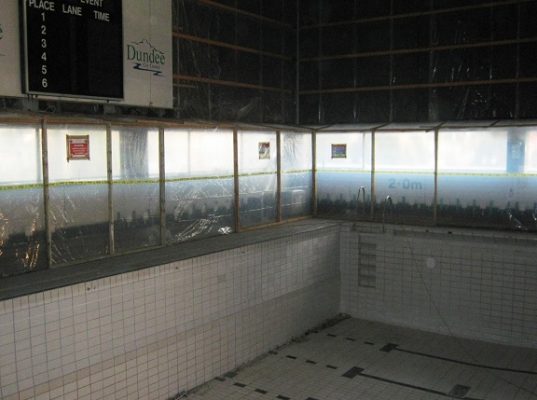